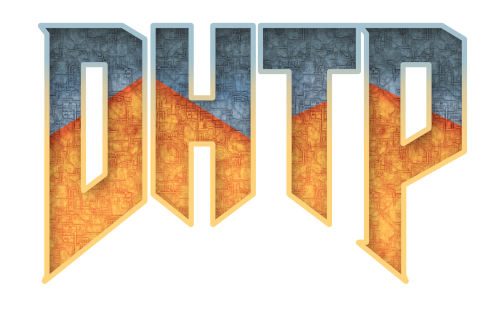 What is the DHTP?
The DHTP is a DOOM community effort to recreate the original DOOM,DOOM2, and Final DOOM textures in high resolution, while keeping the same style and feeling of the originals and be to be used by DOOM engines that support it. There are no upscaled original in this pack. If it does not fit the style then it can't go in.

How to help
You can help the pack by reporting bugs in the pack, report bugs here https://github.com/KuriKai/DHTP/issues
You can also by submitting new textures. To see what needs to be done, browse to the github page and look for ###.placeholder files. these are the ones that have not been done yet.
Please be aware, when you post your textures, people(myself included) will offer suggestions on how to improve it. It is also ultimately up to me whether to accept the textures into the released pack; this is to try and have consistency in the project.
I also urge you to release your textures under a free to use and edit as anyone else sees fit; this will allow others to tweak and improve your textures to give greater consistency, and also help out the community

The DHTP is now hosted on github.
Where you can see the latest versions of the files that will be in the next pack and what textures still need to be made(look for ###.placeholder). You can download each image separately, as a zip or by cloning it to your computer.

This will also allow for revisions of textures to be kept.
website http://dhtp.hiriwa.com
Github page https://github.com/KuriKai/DHTP
«1234567…39»