Here are some things that are new vs the old Oculus DK2:

> Room Scale VR
- Can literally walk around your room and explore in a 3D space!
- Exploring makes a HUGE difference and 1:1 movement makes motion sickness a thing in the past!
- 15m x 15m tracking space, no occlusion of controllers

> Two Motion-Tracked Controllers!
- Sub-millimeter accuracy! No laggy controllers in a 3D space
- Ability to interact with your environment

> SteamVR
- Universal Cross-HMD SDK
- Works with Oculus, HTC Vive, and ALL other OpenVR devices
- Super easy to use!
- Direct Mode for better reliability (no more using the HMD as a secondary monitor!)


I believe supporting SteamVR (OpenVR) as a whole would be best for the Doomsday Engine because of it's universal ability to work with any OpenVR compatible VR Headset (this means no more proprietary VR SDK's) which eliminates the need to add more code every time there is a new headset or new sensor in future headsets since the SDK deals with all of this.

So how do I vision this working? ...Motion Controls!?!

First up, there is no need to implement motion controls (yet!) because this is still a complex problem for 2D sprites as weapons. I believe just supporting the headset for now will be fine with the current set up. I have played TF2 with this headset (sitting using keyboard/mouse) and suffered no motion sickness (besides it being stuck to 60hz because on my monitor on extended mode, update your game valve!)

BUT don't get me wrong... playing Doom with these two controllers would be a dream come true!
Here is what we are working with: 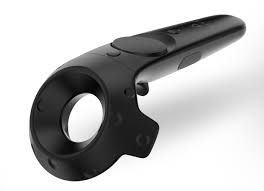 Each controller is equipped with a touch pad NEARLY IDENTICAL with the Steam Controller. Works the same way, has a button click... all sorts of fun! There are also a shared grip button on each of the controllers as well as a trigger on the back. I believe movement should be linked to the left touchpad (press up to move up, down to move down... strafe strafe strafe strafe) and the right controller to be used as a aiming mechanism for shooting the gun.

This is where things get a little tricky though. The crosshair should be linked to the motion controller with the gun sprite on it (preferably right unless you are left handed). It would help if we were using the 3D Models of the doom weapons since we could just attach them to this controller in a 3D space and it would look right, but I suppose the 2D sprite should suffice... haven't tested it so don't know how it would look. But basically to aim you just aim the crosshair up by pointing the controller like a gun and firing! That simple

How do you config all those weapons on a steam controller though? Where are all the buttons! Just use a scroll wheel like this and run your thumb in a circle to select the weapon you want. If, say, you had a doom mod for like 30 different weapons you could potentially have a infinite scroll wheel by making it "pop out" as you scroll up and down in a spiral fashion on the right touchpad.

Anyways, before I get ahead of myself... let me know what you think! I believe if the Doomsday Engine wants to support VR fully and with the new Oculus Rift and HTC Vive literally weeks away; perhaps using Valve's OpenVR is the best choice given it's ability to work with many different HMD's!

Obviously this would take a long time before implemented and may be too much work... but given how great of a reputation VR got on the DK2; having a doom world you can literally duck behind cover and shoot? It's the ultimate goal of VR to completely put you in a new world and the Doom Universe is my first stop.

Let me know what you guys think